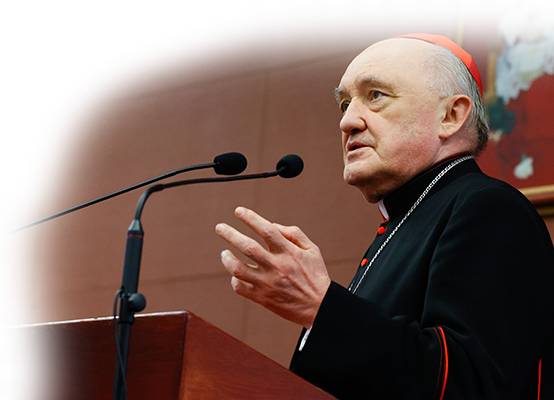 Cardinal Kazimierz Nycz, Metropolitan Archbishop of Warsaw, has been the Grand Chancellor of the Church Faculties of UKSW since 2007.

He was born on 1 February 1950 in Stara Wieś near Oświęcim. In 1967, he began his studies at the Metropolitan Higher Theological Seminary in Kraków. He was ordained a priest on 20 May 1973 in Kaniów. In 1976, he obtained a bachelor’s degree in theology at the Pontifical Faculty of Theology in Kraków. A year later, he was sent for doctoral studies in the field of religious education at the Catholic University of Lublin. He worked in the Catechetical Department of the Metropolitan Curia in Kraków and assisted in pastoral work in the parish of Divine Mercy in Skawina. In the years 1981-1987, he also taught catechetics at the Pontifical Academy of Theology in Kraków. In 1987, he became vice-rector of the Krakow seminary.

In 1988, he was appointed by Pope John Paul II as auxiliary bishop of the Metropolitan of Kraków and titular bishop of Villa Regis, and in 2004 as bishop of the Koszalin-Kołobrzeg diocese. In 2007, by the decision of Pope Benedict XVI, he became the Metropolitan Archbishop of Warsaw.The ingress to the Cathedral Basilica of St. John the Baptist in Warsaw took place on Palm Sunday, 1 April 2007. Three years later, in 2010, he became a member of the Sacred College of Cardinals.

As the Metropolitan Archbishop of Warsaw, in 2007 he took the office of the Grand Chancellor of the UKSW Church Faculties: Theology, Canon Law, Christian Philosophy and Family Studies. Since then, it has been participating in the life of the University, especially in the inauguration of the academic year, the University Celebration and other important events. He is present during the opening of new UKSW facilities, participates in scientific conferences. Every year, during Christmas, Cardinal Nycz invites members of the University Senate to a wafer meeting.